BY SARAH BERMAN, THE BLOCK MAGAZINE

They say grass is always greener on the other side. But for Swedish-born illustrator Daniel Egnéus—having already absorbed the beauty of London, Prague, Berlin, and Rome—the prettiest pastures exist in his dreams. “I always prefer to draw places and things I can’t go geographically,” he says, reached at his century-old home in Milan, Italy. “You have to draw them to imagine them—and then you can maybe feel a little bit safer, when you fantasize.”

Although his ink-and-paper drawings rarely depict explicit cityscapes, the bold fashion and luxuriant architecture of Milan shine through many of Egnéus’s designs. The baroque sophistication of his “Italian rooms,” foregrounded by daring antlered ensembles, confirm his city remains his most valuable muse. Yet with whimsical touches of watercolour and admiration, his subjects are simultaneously otherworldly.

Egnéus’s striking series of “mad hatters,” creature-coiffed figures sporting stark, apathetic expressions, conjure the darker feelings that influence his minimal yet graceful illustrations. “It’s really about when you wake up in the morning and you feel very angry or stupid,” Egnéus says. Emblematic of his dreamy romanticism, the hatters explore anxiety and escapism through gestural line and globby watercolour.

“I just thought it would be so nice to put on a hat—you know? A shark hat if you’re feeling angry, or a polar bear costume,” he explains casually. “It’s just about avoiding people when you’re too tired to confront reality. Or when you’re too ugly to go out—you look at yourself in the mirror and think ‘Oh my God.’”

Egnéus himself has worn several creative hats. Throughout his travels, his work has been adapted for PepsiCola and Häagen-Dazs advertisements, H&M t-shirt designs, and Time Magazine spreads (to name just a few commercial projects). He has even illustrated an award-winning recipe book for dogs.

Comforted by bike rides and the stray cats in his studio courtyard, Egnéus feels content in his current environment, yet still dreams of moving to Paris. “I always think about where I might go next,” he muses. “Maybe I could keep my studio here and then live halfway between Paris and Milano.” Delayed (if only by his uncertain grasp of the French language), Egnéus recalls the many other times he’s packed his books and belongings into boxes: “I’ve moved a lot but it was never on purpose. You meet a girlfriend, you fall in love, and you move around.”

Though an ex-lover initially brought Egnéus to Italy, the 17th century atmosphere and variety of peculiar vintage shops convinced him to stay. On sunny afternoons, Egnéus often finds himself rummaging through old shops in the historic district of Milan, in search of bizarre items he uses to practice still life drawing. 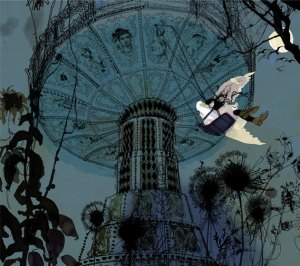 As a result, Egnéus has amassed a personal collection of butterflies and other tiny beasts. “Some are really ugly,” he notes. “I think one is a sort-of giant insect from New Guinea, South America—almost 20 centimeters long.” Along with a set of large buffalo horns, passed on by his Russian grandmother, Egnéus enjoys incorporating these unusual animal artifacts into his drawings. “[They are] nice to study with a looking glass. They are really constructed in a mechanic way. Insects are actually perfect, as animals,” he says. “Though I prefer them dead and behind glass.”

Having no formal training whatsoever, Egnéus held many less-glamorous gigs before he became a full-time illustrator at the age of 24. “I quit school at 15 or 16. I was from a small town so I moved to Stockholm,” he says. “I worked in bookshops and cleaned hospitals, but always drawing in the nighttime.” He adds, “It was really far from what I was dreaming about.”

Twenty years later, with many of those dreams now realized, Egnéus continues to escape into the greener pastures of his imagination: a place both magical and strange, where geese are appropriate seasonal headwear.