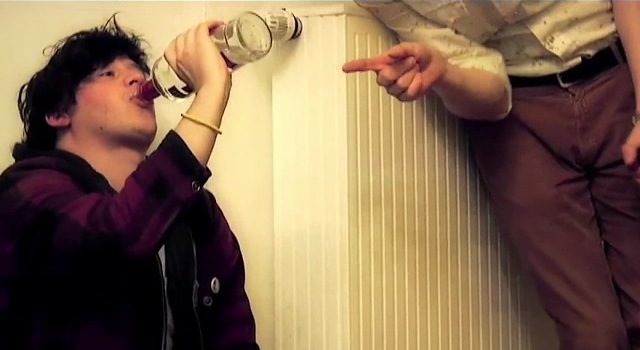 BY SARAH BERMAN, ﻿THE BLOCK MAGAZINE ﻿

If life is a beach for Wavves frontman Nathan Williams, the last two years have brought soaring swells along with some gnarly riptides.

Back in 2008, equipped with a Macbook and lack of better things to do, Williams unwittingly set the music blogosphere abuzz with a few irreverent bursts of lo-fi stoner pop. His eponymous debut received nods from the scene’s most respected tastemakers, catapulting Wavves into indie fame before the 24-year-old even had a chance to move out of his parents’ San Diego home.

“I think it’s cool,” Williams says of his rapid rise to online surf-punk icon. “Now that the Internet is such a major factor, you have the opportunity to listen to more bands than you ever did … I’m happy people listen to my music and like the record.”

However, it didn’t take long for an onstage meltdown at Primavera, a fistfight with Black Lips’ Jared Swilley and a cancelled European tour to galvanize a veritable army of naysayers. Rumours were spread, “Wavves Suxx” shirts were publicly worn, and Williams sort of disappeared into creative hibernation.

“People always have an opinion, and you can’t really help what people say about you,” he says of the various cartoonish insults leveled against him. “In the end it doesn’t really matter. Especially if you’re making music for yourself in the first place, which is what I feel like I do.”

Lucky for Williams, the tides have changed in 2010. The California beach bum left his Macbook behind, and with the help of the late Jay Reatard’s rhythm section, spent three months recording at Sweet Tea Studios in Oxford, Mississippi.

“It was like being a kid in a candy shop,” he says of the esteemed studio space—a sea change from the bedroom acoustics and intentionally buried mixes that helped launch his career. “The studio just had giant shelves full of pedal boards and effects. One by one we just tried things out and found the way we wanted it to sound.”

Although the water guns and sports collectables may have collected dust over the years, Williams continues to get a kick out of his original NES. In fact, the album’s namesake is lifted from a beach-volleyball Nintendo game, and the track “Linus Spacehead” references the hero of yet another videogame classic.

“I play a lot of video games on tour. That makes me happy,” he says, noting that even the glittering, psychedelic album cover pays visual homage to early pixilated gaming systems. “It just looks really cool visually. It’s really fun to look at.”

“There’s also this game Menace Beach,” he continues. “This kid is trying to save this girl from a bunch of monsters and stuff.” Williams’ voice becomes unexpectedly animated as he goes on to describe how the protagonist throws beer bottles at clowns and alien creatures. “And her clothes slowly start to decay, the longer you take to go and get her.”

But just because Williams makes sonic reference to the chimes and midi sounds he heard as a kid, doesn’t mean he yearns for simpler times. “A lot of those games hold up to this day,” he says. “I play them because they’re fun, not because they’re nostalgic.”

When he’s not inspired by vintage game consoles, Williams says television remains a worthy substitute. “I watch TV on mute and play guitar, and just kind of write songs that way.” Williams also lists weed among his creative motivations, and makes no effort to deflect the one-dimensional clichés that go along with such a statement.

‘I have a medical card. And the dispensary is just down the street from my house. It definitely makes it pretty easy.”

Sarah Berman’s writing has appeared in VICE, Adbusters, Maclean’s, the Globe and Mail, the Vancouver Sun and many others. A lifelong supporter of independent and alternative media, Sarah has contributed to nonprofits like Journalists for Human Rights, Megaphone Magazine and Paper Tiger TV. View all posts by Sarah Berman