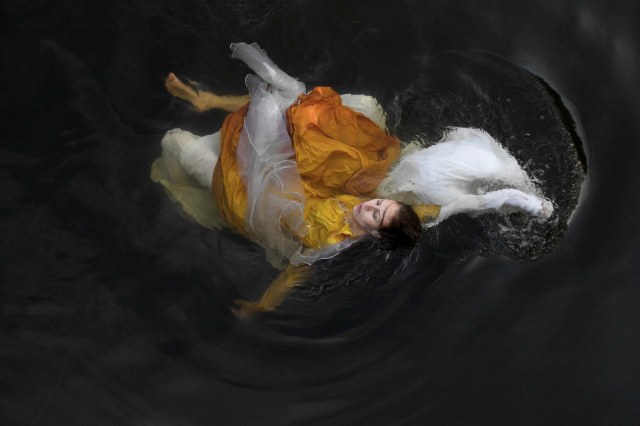 With the Vancouver International Fringe Festival now in full swing, adventurous theatre-goers have a wealth of weird and exciting staged drama to experience.

But in outdoorsy Vancouver, many performances are abandoning the traditional stage in favour of unexpected locations. Even more than in previous years, the festival’s “Bring Your Own Venue” selection boasts a growing hub of local talent.

“Everyone loves putting on their hiking boots and going to see something beautiful,” she says of the city’s near-obsession with off-the-beaten-path plays. A circle of trees, a yoga studio, and the giant yellow crane on Granville Island are just a few of the very-Vancouver venues chosen at this year’s Fringe.

Another ambitious shows takes place underneath the Granville Island ferry dock, along with the rocks, rats and barnacles. Fanconi’s OnSite program helped actor and producer Nita Bowerman get the necessary permissions to use the space for her solo piece wreckage.

“The site is rather adversarial,” Bowerman says of the haunting, spooky wharf. “I’d consider myself a resilient person, but I tried to walk away from that site a few times,” she admits. “In the end it was so compelling, I decided it was worth the discomfort.”

Despite the risks and challenges, Bowerman says theatre in public space adds an extra thrill. “Even in stage theatre, nothing can be absolutely controlled,” she says. Passing party boats, confused onlookers and underfoot critters were on Bowerman’s list of unpredictable variables. “That’s the exhilarating nature of live theatre—which is heightened in site-specific pieces.”

Both Bowerman and Fanconi say each DIY venue comes with it’s own personality, which can be rewarding if the play is successfully integrated into the space. “You have to be open to the environment, listening and responding,” says Bowerman.

Fanconi says site-specific theatre leaves an indelible impression on its audiences—something that Vancouver’s established theatres can’t do. “When they go back to the site they still have the visual trace in their memories,” Fanconi says.

“Those memories are maintained for years and years after the performance. In that sense it’s like public sculpture,” she says. “In a way, site-specific art-making is actually a political act—it’s changing the world.”

Wreckage plays every night, Tuesday to Sunday at 9:00 p.m. at the Granville Island ferry dock. Photo by Brendan Albano.