It’s been blamed on everything from stress to wireless internet, but microbiologists and beekeepers around the world still have a lot to learn when it comes to the decline of honeybee populations.

Ongoing research led by Dr. Leonard Foster at the University of British Columbia will at least offer beekeepers a few new tools for breeding more resilient bees. By identifying “genetic markers” of more hygienic bees, Dr. Foster hopes to save populations from collapse through selection.

“We hope we’ll see fewer bees dying,” says Dr. Foster. “But another impact it should have is to wean beekeepers off some of the harsher chemicals they’ve had to use.”

In 2006, the number of worldwide bee deaths jumped from 15 to 30 per cent, a rate that hasn’t slowed down since. “It is pretty clear now that most of the losses are due to diseases we already knew about,” says Foster, noting that parasitic Varroa mites are the most common problem. 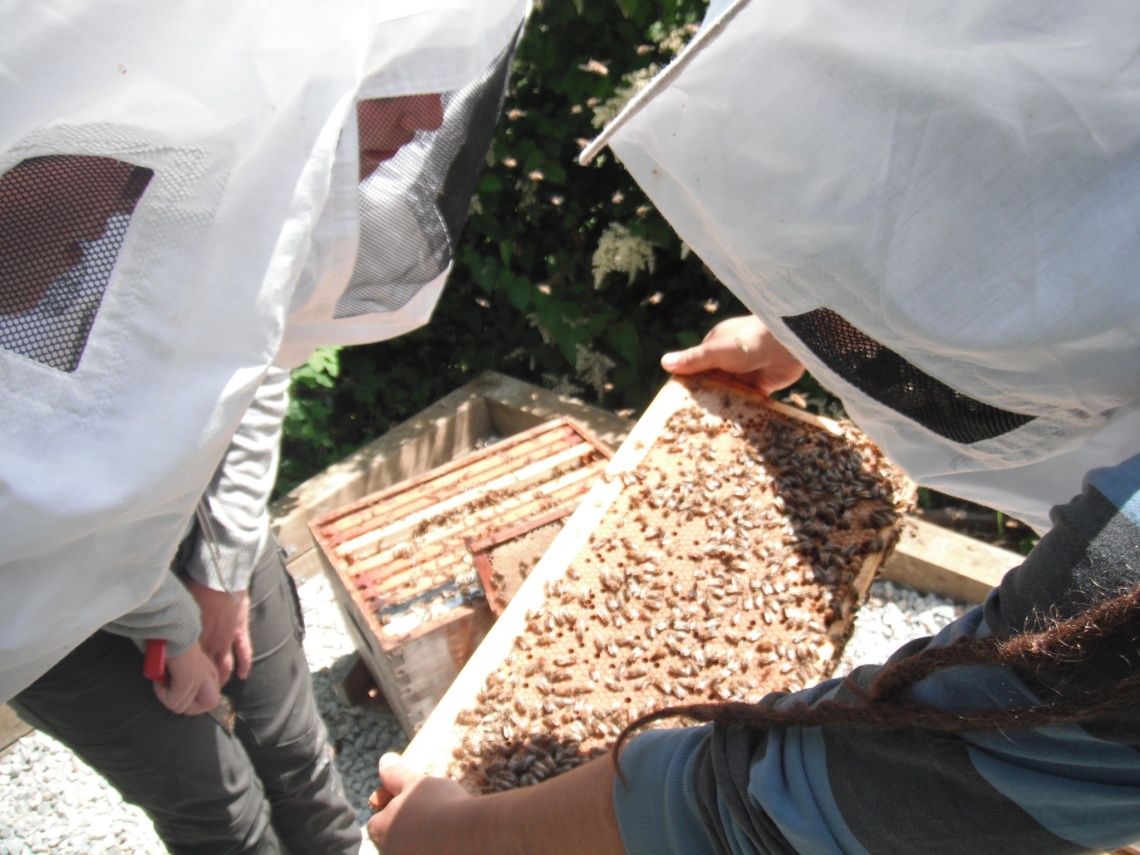 Student beekeeper Rizan Abu-Remaileh tilts a frame of bees into sunlight at the Means of Production community garden in Strathcona.

Dr. Foster says that between 2005 and 2007, those mites became increasingly resistant to three major strains of pesticides used to treat bees. “This pesticide resistance meant that beekeepers who used particular pesticides for pest control would have continued to use them, but suddenly they would have become ineffective.”

Dr. Foster is cautious about pesticide use, but says chemicals are still a necessary part of maintaining healthy bees. “It’s not something you want to put on that insect or livestock if you don’t have to,” he says. “I’d like to get beekeepers thinking more in terms of gene pool value.”

Last weekend Dr. Foster presented his $5.7 million project “Next-generation integrated pest management tools for beekeeping” to a conference of B.C. honey producers. But his approach isn’t the only idea currently in vogue for curbing the loss of bees.

With awareness spreading about the plight of bees, small-scale urban beekeeping is booming in Vancouver. Often with an intent to learn more about colony collapse and experiment with more organic and sustainable methods, local food junkies are taking up beekeeping in swarms.

“Young people are certainly catching on,” says Brian Campbell, an urban apiarist who founded a hands-on beekeeping apprenticeship program in Strathcona. “The median age used to be 90 not long ago,” he jokes.

To encourage pollination and honey production in the city, hives are kept on the roof of City Hall and the Convention Centre, as well as at many of the city’s community gardens. Many urban agriculture enthusiasts are even choosing to keep bees in their backyard.

“A hobby beekeeper has less than 20 different colonies,” Dr. Foster says, highlighting the difference between small-scale operations and the thousands of hives used to commercially pollinate crops. Although Dr. Foster is a supporter of urban ‘swarming,’ he says the overall affect on colony collapse is minimal. “The number of colonies in North America is not influenced by what hobby beekeepers do.”

Dr. Foster says a lack of information among small-scale beekeepers can actually have some negative effects. By ignoring disease treatments altogether, Dr. Foster says one colony can reach and infect hundreds of neighbours.

“It can affect more than just your bees,” he says, adding that bees can travel up to five kilometres from their hive. “The bottom line is that hobby beekeepers often don’t use any of these things [antibiotics, pesticides] and then they often don’t have very healthy bees because of it.”

Both Dr. Foster and Campbell encourage prospective beekeepers to access as much information on the subject as possible, to avoid disease in the first place. “Our class is quite extensive,” says Campbell. “It’s 14 weeks of hands-on training, which I believe is unique across Canada.”

As many Vancouverites take on the practice, Dr. Foster sees new opportunities for growth in urban ecosystems. “Just about any ecosystem you care to look at probably doesn’t have enough pollinators in it—and that definitely includes urban ecosystems,” he says. “Hobby keepers have a lot of value in various aspects like maintaining genetic diversity.” These urban swarms are generally positive initiatives, but they’re not likely to save the bees.