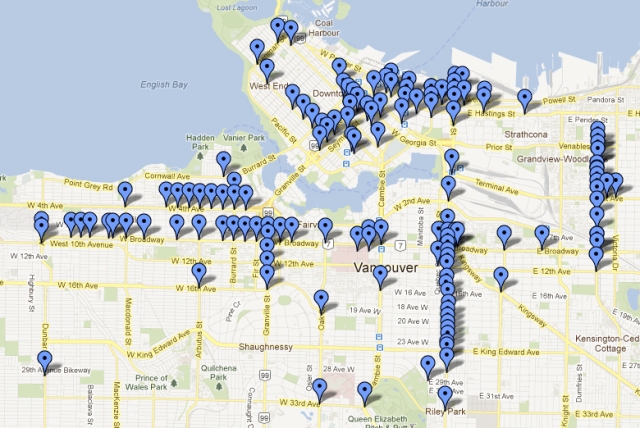 Sure, Vancouver’s got a cut-throat real estate industry—we’ve heard that one before. But down below all the empty towers and backroom deals lies an even more mercenary racket: the fight for postering supremacy.

Yes, all those brightly coloured rectangles populating our city’s traffic poles and construction sites are actually pawns in a decades-long battle hidden in plain sight. And the hands-down winner of Vancouver’s visual real estate war, for the last fifteen years at least, has been a group known ominously as “the poster mafia.” Seriously.

In an effort to clean up visual clutter, the city maintains 330 public poster cylinders along main arteries like Granville, Main, Broadway and Commercial. These 4-foot tall poster spots are meant to house everything from advertisements to community notices to unsolicited public art.

But thanks to the Poster Mafia (okay, the company is officially called the Poster Guy), nearly all of these city-sanctioned spaces are reserved for promotions companies that have the cash for high-volume postering campaigns. By setting out on bikes a few times per day, the company literally cuts out its competition—and posters right over the evidence.

OpenFile decided to investigate by putting up our own posters along Vancouver’s high-traffic areas. We put up 100 posters on Friday morning (the unlucky 13th) and by dinnertime our ads had already began disappearing.

“Posters get covered up really quickly,” explains Adam Cathey, an independent posterer in Vancouver. As one of the few people who competes with the monopoly, he says posters can be slashed and re-posted within a couple of hours.

“We noticed our posters were being taken down pretty militantly—not just a couple days later,” recalls a member in a popular Vancouver pop-punk band, who asked to remain anonymous. The musician was distributing event posters for his band years ago when he discovered the monopoly.

“We asked around, and ended up hearing about this guy Poster Pete, who turned out not to be just a guy, but a whole team of people.” Poster Pete began his Poster Guy business in the mid-80s, and has since been replaced by Richard Chapin, who did not return multiple requests for comment. Although the group has changed hands, their turf and customer base remains largely the same.

The musician says he paid the poster mafia for years, just to protect his posters from being covered up. “As time went on, we would just pay them a lump sum and say ‘here’s a couple hundred; don’t take these down this month,” he says. “It was really the only thing that worked.”

The city, for its part, claims it’s not aware of a long-standing postering monopoly. “This is the first I’ve heard of it,” says Vancouver’s street activity branch manager Scottt Edwards. “Space isn’t guaranteed,” he says. “People can of course post on top of others.”

While there’s nothing inherently illegal about guarding public property in this way, it’s a situation that’s tough on independent performers and community groups who are trying to get a message out without a big budget.

“I’m just a guy with some friends who are show promoters,” explains Cathey, who has also done postering for events at the Waldorf, the Astoria and Pat’s Pub. “I mainly just do local, smaller shows.” Cathey says the monopoly pushes some small-time posterers to post on unsanctioned spaces like telephone poles and bus stops. “There’s steep fines for doing that kind of stuff,” he says. If caught red-handed, penalties can be as high as $2,000.

Neither source expects outright violence from the so-called mafia, but both question the aggressive tactics. “I’m not the kind of guy to pick fights with anyone,” says the musician. “I respect their drive—they’re savvy business men.”