After one too many ‘Ziggy Stardust meets Tiny Tim’ comparisons, performer turns the tables 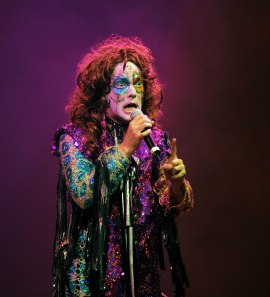 It is possibly the first and only drag show born out of lazy journalism.

The mouthful of a title arises from repeat descriptions of Mac’s larger-than-life persona. When Mac toured The Be(A)st of Taylor Mac—a solo piece he brought to Vancouver in 2009—theatre writers across the globe seemed to be of one mind.

“A writer in the U.K. described it as Ziggy Stardust meets Tiny Tim,” the New York performer recalls, adding that the first comparison seemed innocuous and even clever. “Suddenly all these other journalists started describing me in this way, and I thought: is this a coincidence, or are they just cutting and pasting?”

Sure, David Bowie and Mac are both expert gender-benders, and the 1960s oddball Tiny Tim (known for his falsetto rendition of “Tiptoe Through the Tulips”) shares a penchant for the ukulele. But Mac attests the similarities ended there.

“I understand why journalists compare you to popular things. They’re describing the show in terms of what everyone would know,” Mac says. “Was it just so obvious I was the combination of these two icons? Will I be defined this way all my life?”

In effort to reclaim his originality, and perhaps in mock protest, Mac has put together a biting whirlwind performance composed exclusively of Bowie and Tiny Tim numbers. From “Lady Stardust” to Tiny Tim’s apocalyptic gem “The Other Side,” Mac puts his own spin on their shtick.

“For this show, I wanted to see what happens, and talk about comparison,” he says. “I realized comparison is something that defines our lives, but it’s not something we talk about much.”

Like many of Mac’s previous performances, there’s a sharp cultural criticism underlying the glitz and face paint. By embodying the media-imposed labels, Mac reclaims his own image.

“If something is threatening to take away the story from the storyteller, the storyteller’s job is to incorporate this into the story,” he explains. “That’s exactly what I’ve done.” Mac cites the way members of the queer community choose to “own” slurs leveled against them as another way of reclaiming identity.

But through “owning” the pigeonhole descriptor Ziggy-Stardust-meets-Tiny-Tim, Mac unexpectedly gained a great deal of respect for the two performers.

“I didn’t have a disrespect before,” he says, “but I learned we have quite a lot more similarities than the ukulele and glitter.”

Beyond an androgynous take on glam rock, Mac says the 1972 album The Rise and Fall of Ziggy Stardust is an engaging slice of commentary. “When you explore some of his songs, the conversation he was having in the work is way more interesting than just glam rock.”

And even Tiny Tim—whom Mac previously described as cringeworthy—has an endearing boundary-pushing side. “It was performance art, and I talk about it in the show,” says Mac. “I’m a huge fan now, and I never was.”

Rather fittingly, the intersection of these artists brings Mac into extraordinary new territory. “I don’t want to give too much away, but I will say both David Bowie and Tiny Tim come from a vaudeville sound,” he says. “You may not think it when you hear Bowie, but it’s there.”

As the social hub of the PuSh Festival, Mac promises his Club Push appearance will be a light-hearted and interactive evening. “I’m really looking forward to coming back having some fun,” says Mac.

“And hang out afterwards,” he adds. Much like Lady Stardust, Mac hopes to keep his song going all night long.

Special to The Sun. Photos by Jack Atley.