Women-only recovery experi­ment: did it work or not?

BY SARAH BERMAN, THE TYEE 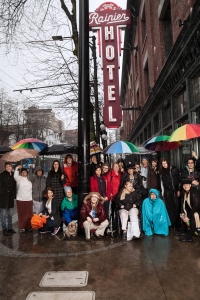 For Sherri Johnstone, resident at the Rainier Women’s Treatment Centre in the Downtown Eastside, the last two weeks have brought on some tearful goodbyes. As Health Canada funding for the four-year pilot project ceased Dec. 1, Johnstone and the Rainier’s 37 current residents are adjusting to immediate cuts in staff and programming.

“It’s been hard,” says Johnstone, who struggled with crack addiction and failed at traditional treatment programs before she was referred to the Rainier in 2011. “We started to open up to these women and now they’re not here… Now we have to do that again with somebody else — it makes me feel like I’m almost back at day one again.”

Before December, Johnstone could gain the benefits of the Rainier’s full range of physical and spiritual recovery tools including meditation, yoga, vocational training and creative writing workshops led by Megaphone. These programs have been cut, though the Megaphone writing workshops will return thanks to private donations. The facility also had an in-house caseworker, counselor, full-time nurse and part-time doctor — all of which have moved off site.

“We’re being encouraged to go to other programs that are outside the facility, which is okay, but a lot of women — like me — I know I don’t like to go out much,” explains Johnstone, who graduated from treatment into drug-free transitional housing after 14 months. Conventional drug rehabilitation programs run three to six months. “I try hard to stay in because all of the drug interactions and everything on the corner.”

“I know there’s programs at LifeSkills, but there’s also a lot of people who use,” she adds. “It’s men as well. And that’s something we haven’t gotten used to yet.”

In Feb. 2009, Health Canada and the B.C. Ministry of Housing and Social Development announced a combined $14.5 million investment into renovating the Rainier Hotel and implementing the first all-women treatment facility in the Downtown Eastside. The addictions centre served women with histories of prolonged homelessness, physical abuse, sex work, mental illness and other barriers to conventional treatment with a new self-directed, holistic and non-punitive approach.

B.C. Housing has renewed its investment in Rainier residents, but Vancouver Coastal Health (VCH), which is contracted to administer treatment in collaboration with the non-profit Portland Hotel Society (PHS), decided not to take up operational costs after Health Canada funding ran dry.

“I can tell you we are not turning our backs on these women,” says VCH senior media relations officer Anna Marie D’Angelo. “I know that there were other programs that were not directly healthcare. At VCH we provide healthcare, so we don’t fund things that aren’t healthcare.”

Instead, VCH has secured one month’s worth of transitional funding, so that residents will still receive meals and visiting clinical services until they are placed in mental health, addictions and food programs elsewhere.

“We’re not saying what was there before was not beneficial. The key things that caused the programs to be beneficial — the housing and the healthcare — are still in place,” D’Angelo says. Residents will continue living at the Rainier past the Jan. 3 cut-off, but the building will function as a Single Room Occupancy (SRO) hotel for women aiming to live drug-free.

To qualify for Health Canada funding, VCH is responsible for completing a performance report on the Rainier. Evaluations are not due until Dec. 31, 2012 and have not been received by Health Canada.

According to D’Angelo, VCH made its funding decision based on evaluations. “There is nothing we saw in the evaluation that showed the benefits were significantly better than other programming we have,” she says. This position is echoed by a Nov. 2 editorial in the Vancouver Sun written by VCH executive director Joanne Bezzubets and senior medical director Dr. Rolando Barrios:

“The B.C. Centre for Excellence and the Portland Hotel Society have been evaluating the results of the project and VCH has been actively involved in the process,” reads part of the op-ed. “At Vancouver Coastal Health, we must conclude that we do not see compelling evidence that the current way of delivering care to the Rainier’s residents is leading to the best possible health outcomes for these women.”

Authors of the evaluation tell a different story. According to Mark Townsend of PHS, which co-wrote the not-yet-submitted report with the B.C. Centre for Excellence in HIV/AIDS (CfE), the Rainier was effective at reaching extremely vulnerable women “where they’re at.”

“The evaluations show this was an effective program for this group of very complicated people,” Townsend says. More results found 61 per cent of participants are treated for health conditions they were unaware of before living at the Rainier, while 77 per cent have been connected with outside employment and training.

“[The] CfE worked with the Portland Hotel Society (PHS) to produce a report that appears to do little more than serve the interests of that organization by presenting findings that would oppose any decision to change how healthcare services would be delivered to clients of the Rainier Hotel,” writes Bezzubets in a letter dated November 5. “Had we been given an opportunity, as required under our agreement, to review it in draft form we could have identified areas of analysis that were completely out of scope from what had been contracted.”

Bezzubets goes on to criticize an “inappropriate and misleading” comparison between the Rainier and the Burnaby Centre for Mental Health and Addiction, which appears in an early version of the report. She also condemns the unofficial release of these documents before VCH signed off.

The letter speaks to an apparent disconnect between VCH and its subcontractors, as well as the health authority’s lack of consistent participation throughout the evaluation process. If the results are scientifically invalid, VCH will have failed its contractual obligations to Health Canada.

“The B.C. Ministry of Health, in coordination with Vancouver Coastal Health, were responsible for the evaluation of the project, including determining appropriate third-party evaluators,” explains Health Canada spokesperson Blossom Leung. “Decisions related to ongoing delivery or sustainability of treatment services is [their] jurisdiction.”

The CfE did not respond to multiple requests for comment by press time.

In the coming weeks, Townsend plans to make an appeal to the provincial government, in hopes of restoring what he calls the “heart and soul” of the Rainier treatment program. Staff and supporters of the Rainier have staged public protests, including a 10-kilometre “Right to Recovery” walk in the style of a New Orleans funeral procession today, Dec. 18.

Whether or not the programming is restored, Johnstone will remember the Rainier’s mindfulness classes and writing workshops as instrumental in her recovery. “At first I didn’t think much of it, but I went,” she recalls of her first Megaphone workshop. “It just opened up the door for me to write.”

Johnstone’s poems have been published in Megaphone and the street paper’s 2012 Voices of the Street literary issue. She says the classes helped organize her thoughts and emotions. “I cried, actually,” Johnstone says of seeing her own writing in print for the first time. “My first one was about my cat, Echo.”  ”My cat is what brought me into this place. When I got her I was smoking crack and blowing the smoke out the window. I knew I had to do something better for her.”

As she continues living clean and working in the Downtown Eastside, Johnstone’s concerns have shifted to other women who just arrived at the Rainier. “What I want is for other women to be able to access the program the way I did,” she says. “I’ve been here for a year and a half, and I’m a very different person than I was when I first walked in.”

Published December 18, 2012. An abridged version of this story originally appeared in Megaphone Magazine.

Sarah Berman’s writing has appeared in VICE, Adbusters, Maclean’s, Reuters, the Globe and Mail, the Vancouver Sun and many others. A lifelong supporter of independent and alternative media, Sarah has contributed to nonprofits like Journalists for Human Rights, Megaphone Magazine and Paper Tiger TV.