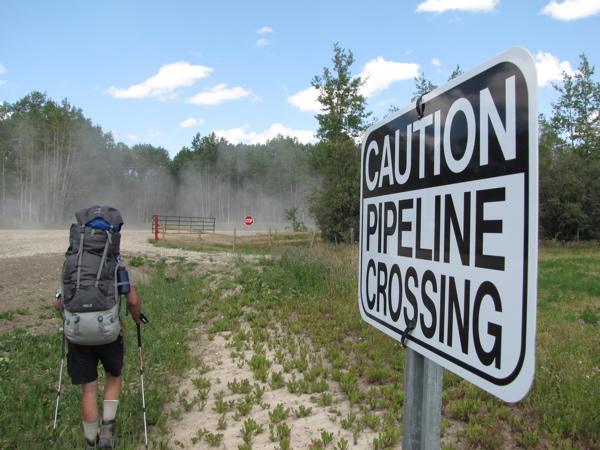 Sitting on a patio across from Mountain Equipment Co-op on Broadway, filmmaker Frank Wolf tells me about how he got into making environmental documentaries.

“I had always done remote wilderness trips around the world,” he says. “I began seeing first-hand how the environment was being degraded.”

Enabled by his day-job at MEC, Wolf has hiked, biked and paddled much of Canada’s wilderness on a shoestring budget. Beginning in 2003, Wolf added lightweight camera gear to the equation, turning his excursions into feature-length films.

“This is my most pointed environmental film,” says Wolf. On the Line follows the path of Enbridge’s proposed Northern Gateway pipeline. The 1,200 kilometre pipe would pump tonnes of unrefined oil from Bruderheim, Alberta to British Columbia’s coast.

Wolf says the impact of the project will be unavoidably devastating for wildlife, communities and local economies. “It’s blowing a hole through 773 watercourses,” he says. “These are fish-bearing rivers and streams that support local livelihoods.”

Wolf dug up the GPS co-ordinates, and set out to trace the pipe. “We started in Fort McMurray with two $70 bikes I found on Craigslist,” he explains. Making several investigative pit stops along the way, Wolf and collaborator Todd McGowan talked to fisherman, First Nations’ bands, and eco-tourism employees who would be hard-hit by the pipeline project.

“It’s a ground-level view,” he says. “Locals know the landscape better than anyone.”

This is the third documentary Wolf has shown at VIFF. “It’s a great place for environmental films,” Wolf says. The birthplace of both Greenpeace and MEC, Vancouver is known for its environmental legacy. “VIFF was ideal for me because it’s B.C.-centric. This particular film is about an issue facing Western Canada, so it makes sense.”

“Other film festivals might be scared off by controversial nature of the film,” he adds. “TIFF is more of a launch for Hollywood films—it isn’t really interested in the low-budget work we do.”

Although Vancouver may brand itself as one of the world’s greenest cities, Wolf says there’s still work to be done. “We’re not there yet, but the current council and mayor are definitely on the right track,” he says. “You have to set big goals in order to achieve them.”

As a bike commuter who doesn’t own a car or cell phone, Wolf is a vocal advocate of two-wheeled transit. “Bike lanes are good for everyone—whether they realize it at this point or not,” he says. “If you build it, they will come.”