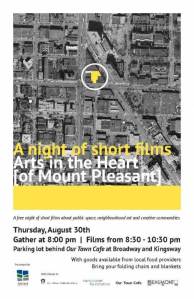 On Thursday, August 30, the Vancouver Public Space Network is presenting an awesome collection of short films about public art, advertising, city hacking and other urban public space issues. Not to ruin the surprise or anything, but one of those short films is my documentary On Corporate Graffiti!

The doc follows a group of young activists as they paint over more than 20,000 square feet of illegal billboard advertising in New York City. The street art bible Urban Prankster says On Corporate Graffiti “does a great job of telling the story of the [New York Street Advertising Takeover] project and the positive impact it had on our streets.”

I’m not in the city and will regretfully miss this super cool outdoor screening. But if you’re in Vancouver next Thursday, meet at 8 p.m. behind Our Town Cafe on Kingsway and Broadway for an evening of ideas, snacks and great company. The food is free, but BYO chair!

More details on the VPSN blog.